We’ve got another showdown! James Bond vs John Wick. Two of the roughest and toughest guys out there.

I’d be scared to see these two battle it out hand-to-hand. Luckily, we’re just doing a style showdown. For eight rounds, we will see which one has bested the other based on certain style attributes. 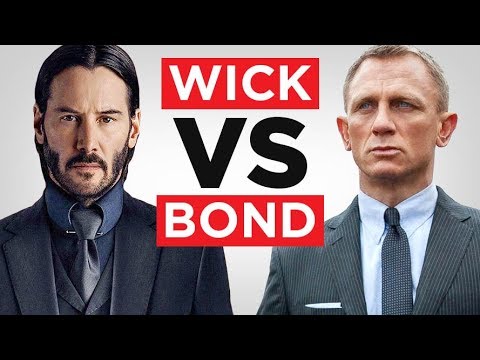 How do the suit styles of Bond and Wick differ? Click to view our guide to men's suit styles.

Bond is well-versed with suits. He’s worn both two-piece and three-piece suits and he is the man to ask about men's suit colors – he's got brown, grey and dark blue and experiments with different lapel sizes and numbers of buttons.

Whatever the case, Bond always looks stylish. His suit matches the occasion and he stands out among all the gents in the room.

Meanwhile, Wick is pretty standard with his suit preferences. His go-to choice? A tailored, three-piece dark suit. His go-to features are body-armor liners, two-button fronts, and tapered trousers. Wick keeps his suits simple but he always appears bold and ready-for-action and he looked especially dangerous in Rome – where he wore an all-black suit with red cufflinks.

Verdict: Bond and Wick are both stylish men. John Wick has his go-to style that works while Bond can pull-off every suit he touches. Based on his versatile wardrobe, Bond wins this round. 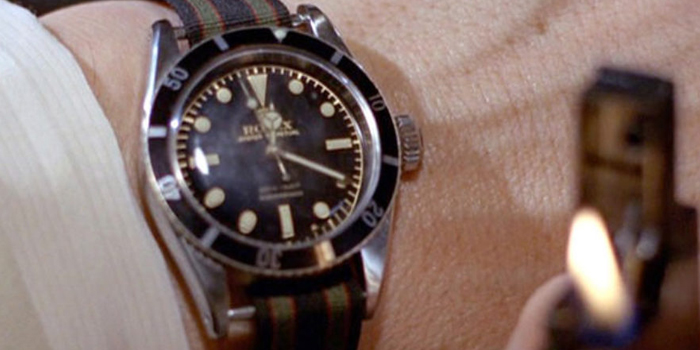 Bond likes to accessorize with a nice Rolex. Do you want to know which Rolex to buy?

Bond’s most well-known watches are the Rolex Submariner and Omega Seamaster.

The Rolex Submariner retails for slightly under $10,000 while the Omega Seamaster goes for a few grand. Bond can rock a belt just as well as suspenders. He also shows off some nice sunglasses from time to time.

Bond’s watches are the Rolex Submariner and Omega Seamaster.

Wick's style of watches isn't as flashy or noticeable. It's a Carl F Butcherer Manero AutoDate watch, which retails for $2,000. Besides that, Wick accessorizes his suit with a black leather belt. His accessories are clean and simple – just like his suit. And his unassuming personality.

Verdict: Wick’s accessories closely match his personality while Bond's are flashier. But since Wick doesn't accessorize or take as many risks as Bond, Bond has the edge style-wise.

Who's got the better hair: Bond or Wick? Click to see a full guide to men's hair.

We all know Bond's signature look: hair neatly trimmed and slightly gelled. His clean-shaven face complements his strong jawline and stoic facial expressions. He incorporates the prim-and-proper look whether he’s in a tux or a dark polo.

As for Wick's approach to grooming, his hair is noticeably longer but usually kept slicked back. He also clearly knows his beard trimming styles because he also sports well-trimmed facial hair.

Verdict: This is a toss-up. Bond’s grooming is timeless but Wick’s long-haired, bearded look is currently in style and adds to his bold demeanor. I’ll call it a tie here.

Do Bond and Wick know how a suit should fit?

Whatever Bond fashions – a suit, polo, overcoat or undershirt – it's likely to fit him.

James Bond knows how a man's suit should fit.

Even Vesper was able to order Bond a tailored suit by sizing him up on first glance but there have been times he sported a suit which is too small and snug for his frame.

Other times he’s worn a three-piece suit with lapels that are far too large.

On the other hand, Wick has far more consistency when it comes to fit. He wears custom suits (and it sure does help when Luca Mosca personally designs your wardrobe).

Verdict: Bond’s imperfect record with fit doesn’t hold a candle to Wick’s consistency. This round goes to Wick. 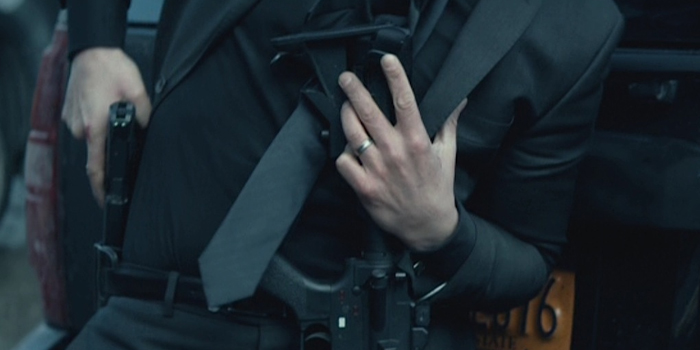 How does each guy's wardrobe aid them in the line of work? Well, Bond’s suits are reasonably functional – he can fit guns and knives into his suit as needed. He can also run, fight and maneuver around in it easily and he’s also done his work in stylish polo shirts and winter coats. So he’s well-balanced when it comes to functional clothing.

But Wick’s suits bring functional to a new level. Why? He incorporates BODY ARMOR into them! Whether he’s fighting three people at once or fending off a gunman, he’s able to leverage his body armor to protect himself. That means he can perform his job at a more badass level.

Some things never go out of style. But Bond demonstrates an extraordinary sense of variety – whether it’s a swimsuit or tux, a polo or suit, an overcoat or full winter coat… he’s always in tune with the occasion and environment. He can go with a classic look or experiment with colors. And he pulls off looking stylish no matter what.

Wick is on the other end of the spectrum. You’ll really just see him in a dark-colored suit or the occasional white undershirt, jeans and leather jacket combo. His style matches his mysterious aura and emotional darkness, but it's invariable.

Verdict: Highly stylish men can work with different wardrobe pieces, fabrics and designs. So this round goes to Bond.

Men's Style: Bond vs Wick Round 7 – Appearance in Public

Both men are fighters in their profession and in life but how does each one sustain his look after a difficult day at the office? Bond – after a fight that leaves him bruised and bloodied – is usually quick to compose himself.

He's able to change out his clothes and return to his clean appearance in no time. We don't know whether James Bond has a male grooming routine but we suspect he does.

Bond is usually quick to compose himself after a fight.

Wick can be as composed as Bond, but his appearance takes the back seat at times. Instead of wiping off the blood or changing clothes, he pursues his next target with undying determination. Wick is so composed that he can traverse through crowds almost unnoticed. That composure overpowers what he lacks in appearance.

Verdict: Kudos to both guys for having nerves of steel. But we've got to admire Bond’s ability to look good following a gruesome episode.

Comparing these two in terms of confidence? That's tricky. Nearly everything about Bond exudes confidence. His looks, his charm and his wit. The way he plays poker. The way he interacts with women in public and behind closed doors.

And there's his business-as-usual, stoic look which reinforces his intensity and mental fortitude. There's no doubt about it – James Bond is a stylish and confident man.

“Nearly everything about Bond exudes confidence.”

Wick is certainly confident but he doesn't have the same cool demeanor that Bond has. Unlike Bond, Wick deals with people in a blunt and forthrightly manner. His nickname might as well be Mr. No-Nonsense.

Verdict: This is a tough one – Bond presents the more confident front but Wick’s no-nonsense attitude is what makes him more imposing. I'll call this in favor of Wick.

Who Wins This Showdown?

We've had James Bond and John Wick compete for eight intense rounds. The final tally is 4 points for Bond, 3 points for Wick and 1 point shared…

This style battle goes to Bond!

I wouldn’t want to fight either of them but if I was ever in a fashion duel, I may fare just a bit better against Wick than I would against Bond.

Do you agree with these results?

Well, this showdown between Bond and Wick isn’t really about who wins and who loses. It’s about analyzing each man’s style and identifying what parts you like and incorporating those into your wardrobe.

If you enjoy watching these guys on screen, then surely you’ll want to try adopting some of their wardrobe choices. Look at them as style inspirations.

If you liked this battle, click here for a style showdown between Bruce Wayne and Tony Stark.  We love our superheroes here at RMRS, so we figured we’d bring in a little pop culture to our style lessons. And if you enjoyed reading about Bond’s style in this battle, you can click here to learn how to dress like James Bond.

And gentlemen – if you haven’t already, click here to sign up for Menfluential 2019.  I personally founded Menfluential with my friend Aaron Marino. It’s an AWESOME event with lots of opportunities for you to learn, network, and grow as a professional and as a person.

Get your ticket today to gain solid advice on men's style and grooming, strength and fitness, and self-development. Trust me, you won’t regret it. Get your Menfluential 2019 ticket before it’s too late!

5 Must-Have Accessories for Your Man